About Us » Principal's Message

Christy Wright has 27 years of experience in education.  This is her forth year to serve as principal of Blanche School.


Mrs. Wright began her teaching career at Flintville Jr. High as an English teacher.  She remained at Flintville as the school transitioned to an elementary school and continued to teach English for 14 years.  In 2008, she began working with the Flintville Elementary leadership team as the Curriculum Coordinator/Assistant Principal for eight years.  In the fall of 2014, Mrs. Wright joined Stone Bridge Academic Learning Center and served as the Building Coordinator and RTI2 Coordinator for the Lincoln County Department of Education.


Mrs. Wright is a native of Lincoln County and lives in the Flintville community with her husband, Sammy.  She has two sons, Caleb and Barrett.  Caleb is a physical education teacher and coach at Sparkman Middle School and Barrett is a senior at UAH majoring in mechanical engineering.  She enjoys spending time with her family, going to the beach, and supporting the Tennessee Vols and Titans. 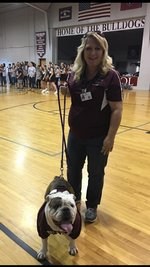